How Do We Choose Range Hoods Efficiently? | Empava® – Empava Appliances Skip to content

How Do We Choose Range Hoods Efficiently?

Convection and other added features help make over-the-range microwave ovens an enticing choice over space-stealing countertop models. But if you care about venting smoke and fumes, you're better off with a range hood, especially if you cook on a higher-powered stove.

Consumer Reports does not test range hoods at this time, but this buying guide can help you before you shop.

Over-the-range hoods have become as stylish as they are practical. Most now offer the commercial look of stainless steel—and you needn't pay a pro-style price to get a pro-style hood.

The best hoods we tested in the past excelled at containing and exhausting smoke and fumes and exchanging air. Some were also notably quieter than the others and better at delivering high and low levels of lighting. Our recent tests of microwaves focused on cooking evenness, automatic defrosting ability, speed of heating, noise, ease of use, and venting. Note that even the best can't vent as well as a range hood.

Vented or duct-free? We do not recommend a ductless hood as it will take the smoke and odors and disperse them throughout the kitchen and the rest of the house. Venting the hood to the outside is better, but more complicated to install.

Wall chimney hoods can work where there are no cabinets and mount with exposed vent stacks on the wall. Island hoods, which also work above a peninsula, are mounted to and vented through ductwork in the ceiling. These lack a wall of cabinets alongside them to help funnel fumes, so consider one that is at least six inches wider than the cooktop.

This is one time when bigger often is better. Any hood you consider should be at least as wide as the cooking surface it will be installed above. And avoid downdraft hoods, which were unimpressive in our past tests.

Whether you opt for a hood or an over-the-range microwave oven, be sure it's installed according to the manufacturer's directions—typically, 18 to 30 inches above the burners or elements. That gives you working room while helping to prevent steam from escaping to the sides. Vent outdoors, if possible, using the largest-size solid, smooth-walled metal ducting that fits. Keep duct runs short and minimize bends to maximize airflow. A wall or roof cap outside the house prevents back drafts. Wash or replace the filters every one to three months—or more often if you cook frequently.

The layout of your kitchen largely dictates the type of range hood you can use. To choose the right size range hood, be sure that any model you consider is at least as wide as the cooking surface it goes above. Here are the types of range hoods to consider.
These mount under the bottom of a wall cabinet. Ductwork inside an adjoining wall, chase, soffit, or ceiling can exhaust smoke and fumes to the outside. In a few models, a shallow hood slides out of the upper kitchen cabinet when you need it. Typical kitchen cabinets extend only about halfway across the stove, so this extension routes steam and smoke away from cabinet faces and back toward the suction end of the range hood. This design steals cabinet space, but might be the only choice for those who cannot achieve the recommended stove-to-hood clearance with a standard under-cabinet-hood design.
Wall-chimney hoods work where there are no cabinets over the range and mount with exposed vent stacks on the wall to vent to the outside.
Island hood These are mounted to and vented through ductwork in the ceiling. They lack a wall or cabinets alongside them to help funnel fumes so should be wider than the cooking surface.
These try to reverse the direction of rising smoke and fumes and exhaust them through ducts running beneath the floor. Our past tests found they were among the least effective at removing smoke and steam. While they can be used anywhere in the kitchen, their main application is in islands where it might not be possible to route ductwork through the ceiling.
This is typically an option on some hoods, whether under-cabinet, wall or island. This type of installation directs steam, heat, and smoke away from the stovetop, but back into the kitchen. Its main filters can trap oil and grease droplets dispersed into the air above the range, and in most cases an optional carbon filter is available to reduce odors. We do not recommend a ductless hood, as it will take the smoke and odors being generated by the stove and disperse them throughout the kitchen and the rest of the home.
Select a model at least as wide as the cooking surface underneath. (Island-mount hoods lack a wall or cabinets alongside them to help to funnel fumes, so they should be wider than the cooktop.) These are some range hood features to consider.
Manufacturers tout the cubic feet per minute (CFM) of exhausted air. More airflow means faster ventilation, but it doesn't guarantee better smoke capture and removal in your kitchen. Many hoods that we tested that claimed to have modest airflow vented as well as those with twice the airflow.
Most of the hoods we tested offered from three to six fan speeds. We recommend a minimum of two speeds: a high-speed setting to use when cooking and a very low and very quiet setting to use after cooking to continue to ventilate the space while eating. Any more than three set speeds are too many. If the manufacturer wants to provide more than three speeds, it should just use a variable speed switch that the user can easily set to any speed desired.
A built-in temperature sensor in some models automatically turns on the fan if the temperature below the hood gets too high. This feature is available mainly on over-the-range microwaves. The real purpose of the thermostat is to protect the microwave electronics from being damaged by high temperatures. If the temperature under the microwave is too high, the exhaust fan comes on to draw away the hot air and pull in cooler air from the rest of the kitchen. But we do not recommend this feature on range hoods because if you are cooking with oil and your pan catches fire, the exhaust fan will come on, drawing more air to the fire, fanning it, and perhaps making matters worse.
This convenient feature turns off the fan after a set period of time.

Range hoods come in four basic configurations, each designed for a specific application: under cabinet (vented and nonvented), wall chimney, downdraft, and island location. They range from 33- to 66-inch widths. Features to look for include high cubic-foot-per-minute capacity, electronic controls, auto start/speed heat sensor, food-warming capabilities, auto extend and retract, filter-maintenance indicators, and halogen lights.
Share on Facebook Share on Twitter Share on Email Share on Pinterest Share on Tumblr
How Does A Wood-Fire Pizza Oven Work?Back to NewsHow To Use An Induction Cooktop Well?

How To Store Your Wine Properly?

How To Choose A Gas Range？

What Should You Do When Your Oven Does Not Work?

The Reason Why You Need A Pizza Oven

Let customers speak for us

Great oven need something small and it fit perfect, love the glass. Also my husband call customer/technician support he has questions setting it up and they were able to help and answer his questions. 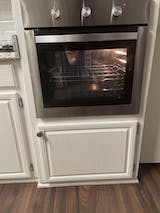 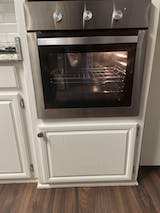 Really nice cooktop and easy to install. The sleek design and high quality materials used doesnt match its price! Well done Empava! I will definetly recommend this product to all I know!

I love the look it gives my kitchen in my new house. I've never had a 5 range stove before and never had a gas stove either. This is the best of each world. I love it and find myself cooking up a storm just to use the stove top. Installation was easy and went off without a hitch. It has a very clean sleek look that makes my counter pop. Now I need a matching oven!

I bought EMPV-36GC23 cooktop and it is very nice. It was very easy to setup and light weight. 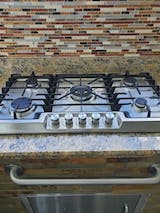 I purchased my Empava Built-in 30 in. Gas Cooktop - 5 Sealed Burners Cook Tops in Stainless Steel from Home Depot as I decided to get new cabinets and counter tops. My 30 year old 36 inch cooktop had to be replaced. Had to wait on installation of cabinets to get the Empava installed.. . No problems with installation. Works great and looks good in my unfinished kitchen. Glad to get upgraded to cooktop with sealed burners that can work on propane when the Texas grid fails. Great buy! 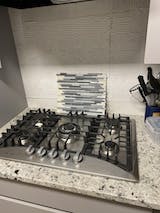